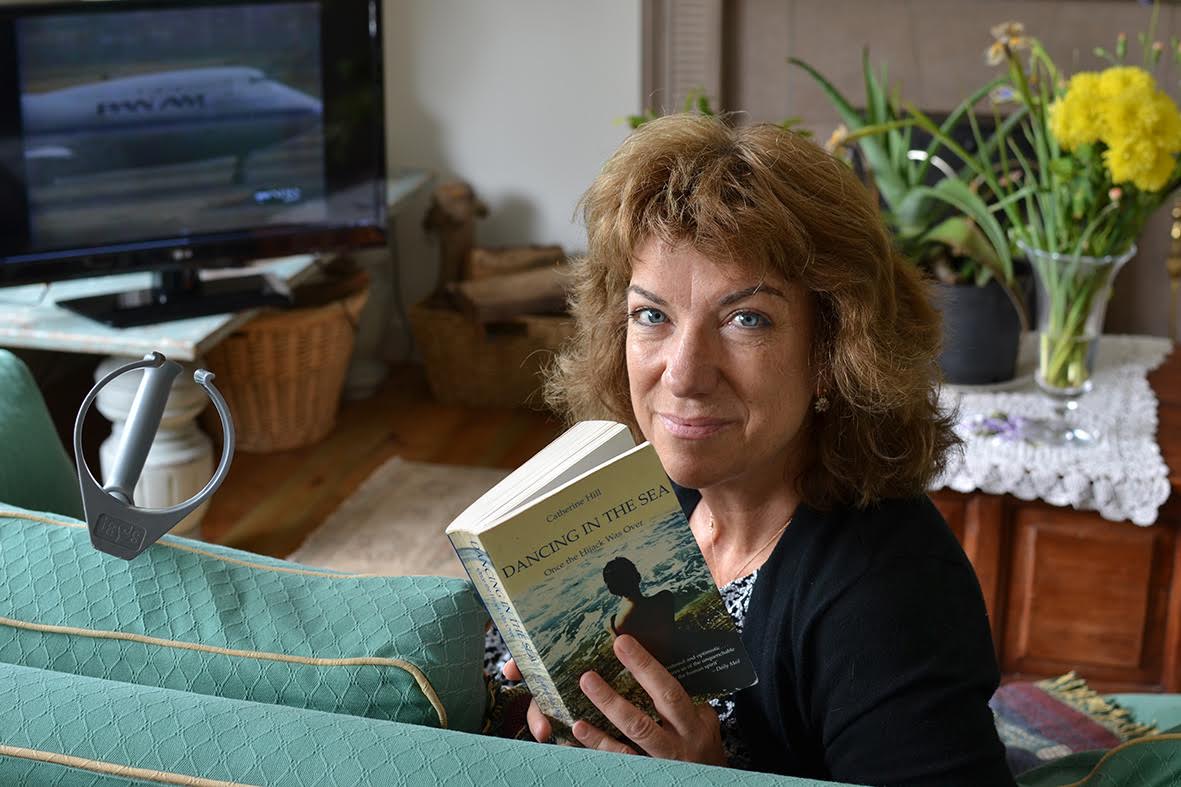 Catherines story. Caught up in a hijacking, at the age of 26 Catherine Hill’s life was changed forever in the most dramatic fashion. While on a trip with her then boyfriend, she found herself in the midst of a Palestine Liberation Organisation (PLO) plane hijacking. During the course of the 17-hour ordeal a hand grenade was thrown and exploded next to her, causing catastrophic damage to her left buttock and femur.  In an instant Catherine’s body was changed forever.  It took three years to recover from the main injuries, but, inevitably, the reverberations have been felt ever since.  Catherine walks with crutches as her damaged leg is shorter and weaker than the other. Over the course of her recovery Catherine found that her body responded by building muscle elsewhere, particularly in her torso and shoulders and she was able to continue her rehabilitation by walking in the mountains near her adopted home in Italy, but the physical and psychological scars from such a traumatic event continue to make themselves felt even to this day.

Returning to the UK

Now in her late fifties, Catherine has relocated back to the UK after battling ovarian cancer and dealing with the breakdown in her relationship. ‘After a stormy few years I was back in the UK and making a fresh start. But I was much less active than before, so I decided to take up dance classes and generally get fit,’ Catherine explained, ‘However, I have a tendency to push myself very hard and, through over-exertion, I managed to severely injure the knee in my good leg.’

What followed was three years of pain, various medical procedures that yielded little improvement, a number of falls and even breaking the toes on the same foot three times.  It was at about this point that a friend asked Catherine to accompany her to KMSTC to see what the centre was like and ask for information.

‘I remember hobbling in with my friend and being struck immediately by the magic of Kent MS Therapy Centre.  I remember feeling a certain reluctance about visiting at first as, ever since my injuries at the hands of the hijackers, I have tended to keep away from other ‘ill people’, whatever their condition, for fear of being drawn into wallowing about my own challenges.  I couldn’t have been more wrong about the atmosphere at KMSTC – it is a place of mutual support and healing, no wallowing allowed.  I met the most beautiful people who don’t let their condition rule their lives.’

Catherine signed up for a course of Hyperbaric Oxygen Therapy (Oxygen Therapy) after consulting with the Centre’s Member Support Manager.  And three months down the line Catherine has been stunned by the improvement she has experienced.  ‘Within two cycles  of Oxygen Therapy I noticed the heat of inflammation in my knee begin to dissipate. My knee is now feeling completely healed. What’s more, I have fallen in love with KMSTC and made some amazing friends along the way.’

‘I was unfortunate enough to have to visit A&E over the Christmas period due to a virulent chest infection that resulted in pleurisy and once again I saw off the lingering symptoms after 3 sessions of Oxygen Therapy. While in A and E, I bore witness to the terrible pressure the NHS is having to endure at the moment. KMSTC on the other hand is a haven of peace, excellence and utter professionalism.  The compassion and love that exists there is something very special.  My sister, an MS Specialist Clinician in the West Country, recently visited and was bowled over by the place.’

‘I would recommend jumping into the Oxygen Therapy chamber over taking any pills – the treatment has turned things around for me physically, while the Centre and people in it feed my soul.’

A story of three generations. Twenty-year-old Tonisha Leppard is the third generation of her family…

Lizzie's story. "I started Oxygen Therapy to help with Fibromyalgia. I was overjoyed to find…

Oxygen Therapy provides relief and support for many conditions

Oxygen Therapy can provide symptomatic relief and support for many conditions, including Fibromyalgia, slow-healing wounds,…